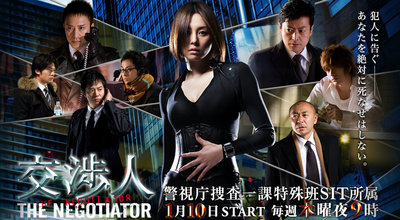 Judging from the title of the show, I guess you should be able to deduce that it’ll centre around negotiators and their line of work. Well, but apart from that, there’s also the truth behind her (the main lead, centre of pic) dad’s death [died in line of duty] and the incident surrounding that.

Very little is revealed along the way, and even up till the end of the series, the details aren’t exactly blatantly spelt out, and it’s kind of left to the audience to interpret the exact happenings and details, though the rough idea is quite clear. =D

Of course, what is shown while they try to investigate deeper into the past are just other criminal cases which require the need of a negotiator present. Some of the negotiation methods seem rather useful in that kind of situation while others I can’t really see the usefulness and the credibility of that working in an actual situation like that. Haha.

The story ends rather peacefully, and the truth is out, though like I said earlier, the exact truth isn’t fully spelt out.

Some comments:
1) The female accomplice in ep 2 has really some bad acting, at least the way she tries to laugh hysterically (or rather in a mocking manner) is really quite weird that I felt like laughing at that awkward facial expression and acting. Ah well.
2) In the “strip scene” of ep 2, it clearly shows that the female lead did really undergo quite a bit of training and toning to present her character’s toned body as well. Wonder if the producers wrote the script like that on purpose for more “fan service” or it’s just one of the scenarios they came up with to make the negotiator’s work more varied in the situations they’re involved in. Shrugs =D
3) I wonder how many takes it took to finish filming the credits, considering how much food was consumed. Of course, judging from the shots shown alone, it isn’t that much, but I do suppose when the filming is done, certainly more has been eaten (due to NG or getting a good flow of the actions). Haha, and the ending credits’ editing required some work, and was presented in quite an interesting fashion. They sure can come up with various ways of presenting ending credits.

Overall, this drama serial is quite ordinary, and there aren’t many episodes, which made the story a little weaker bah, in terms of development and substantial story/plot. Go watch if you’re interested in negotiators. Haha.